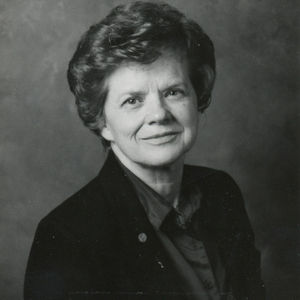 Grandparents can play an important role in strengthening families and building resilience for youth.  Since today is National Grandparents Day, I wanted to introduce you to Grandma Sarah, my husband’s grandmother. Sarah Melissa Broadbent Paulsen was a remarkable lady.  She had a love for all children, especially her own.  When she was the mother of 5 young children, she was called to serve with her husband Finn Paulsen as a mission president and companion  for The Church of Jesus Christ of Latter-day Saints in Brazil.

Just ten years later, she was called to be the First Counselor in the General Primary Presidency, and served the primary children of the world and their leaders with love and compassion.

When I first met her just prior to becoming engaged to my husband, she talked him up to me like he was the BEST young man that ever existed-which he is!  I tell you all of this because Sarah was a remarkable woman and to know her was to love her. She has a strong posterity and they all (130 +) still get together every Christmas, each year for a family reunion, and at other times throughout the year.

Although her children and grandchildren have faced many challenges, they remain faithful and united as a family.  I’ve realized this is because of her secret weapon. Something she made sure to do often. Something that, when I first married into the family, intimidated me very much.  Since then, it’s something I’ve come to admire and love about her.  It’s something that is still done in the family, years after her death.  From my research, and personal experience, I believe it has fostered the love and support they have for each other.

What is this secret weapon that builds resilience, connection and unity among family members?

Yep, that’s right.  At every extended family gathering such as the yearly Christmas party and family reunion, she would invite everyone to share a talent-in front of everyone else in attendance.  This is a tradition that has carried on well past her death, and still occurs today.  I’ll admit, the first few years, this totally intimidated me.  All of the singing, dancing, instrument playing, poem reciting, etc., was so intimidating .  I was very overwhelmed by the noise and ALL those people-130 to be exact.

However, over the years, I have seen the inspiration and beauty in this gathering of her family. One that led to unifying them in an activity where each took a turn in the spotlight, each was lovingly cheered on, and each was made to feel special within the realms of those who love you the most.  In the 16 years that I’ve been in this family, I have seen most all family members face some very difficult challenges.  Yet, they have remained strong, resilient and faithful.   Research proves Grandma Sarah’s secret weapon to be true.  Connection and resilience comes from gathering and from unconditional love and support. 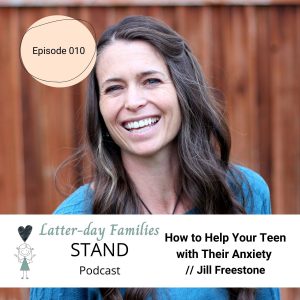 Episode 010: How to Help Your Teen with Their Anxiety//Jill Freestone

Nearly a third of all teens will experience an anxiety disorder during their lifetime. Is your teen one of them?
Guest Jill Freestone is an Anxiety & Emotional Resilience Coach who works with both parents and teens so they can manage their anxiety and come to view it as a strength instead of a weakness. 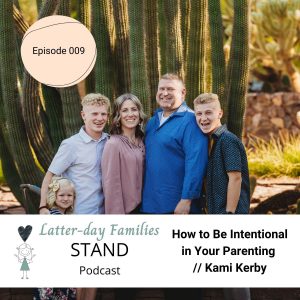 Episode 009: How to Be Intentional in Your Parenting // Kami Kerby

Do you struggle with how to set boundaries and give consequences in a way that builds and supports your teens?

Guest Kami Kerby teaches us how to set boundaries and high expectations as parents, and also how to enforce them with empathy and love so real learning takes place. 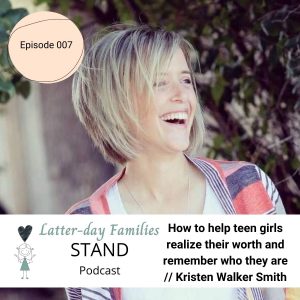 Episode 007: How to Help Teen Girls Realize Their Worth and Remember Who They Are // Kristen Walker Smith

Teen girls today are getting distracted form who they really are, the mission they came here to fulfill and forgetting their eternal value. They are believing Satan’s lies about who they are, where their values lies, and what they should be doing to find joy.

Guest Kristen Walker Smith provides insight about how we can help build them up to see themselves how God sees them. As a teen mentor, podcast host and the creator of many tools and resources for teen girls, Kristen provides many tools to get your teen started in the journey of realizing that they are elect youth! 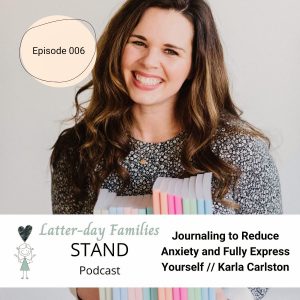 Do you know that a journaling practice can be a powerful tool?

My guest Karla shares her passion for journaling in an effort to reduce anxiety, create a safe space for thoughts, and as a healthy place to express yourself. 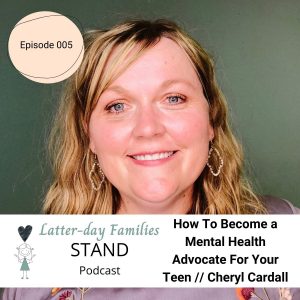 Episode 005: How to Become a Mental Health Advocate for Your Teen // Cheryl Cardall

Do you have a teen or child who faces mental health challenges?
Do you know what signs to look for that may indicate that mental health needs to be assessed and addressed? Guest Cheryl Cardall, host of the @FightLikeAMotherPodcast addresses these topics and more as she guides you through what steps to take to stand for and with your children and teens to advocate for their mental health needs. 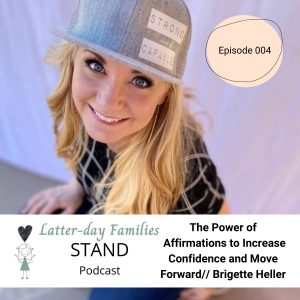 Episode 004: The Power of Affirmations to Increase Confidence and Move Forward // Brigette Heller

Using affirmations can help you rewrite your thought scripts, realize your divine worth, and move forward. Learn the “why” and “how” with guest Brigette Heller. 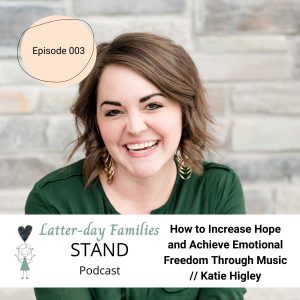 Episode 003: How to Increase Hope and Achieve Emotional Freedom Through Music // Katie Higley

Listen to the full episode to hear more about an interesting study Katie describes that shows the positive impact it has on people when they sing together in unison. She will also give you an insightful tip about how you can create a song with any scripture or affirmation. It’s something she has her students do, and it’s powerful! 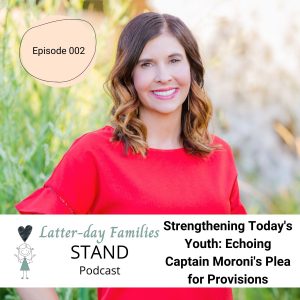 Are you the parent or religious leader of a teenager? If so, this episode is for you!
In this episode, I am discussing my passion for advocating that parents and leaders help children and teens utilize resources and tools that may help them overcome many of the unique challenges they face today. Did you know that Captain Moroni in the Book of Mormon was also passionate about tools and resources? Yep! He demanded them, as he knew they were a key to the success of his people. He called them provisions! 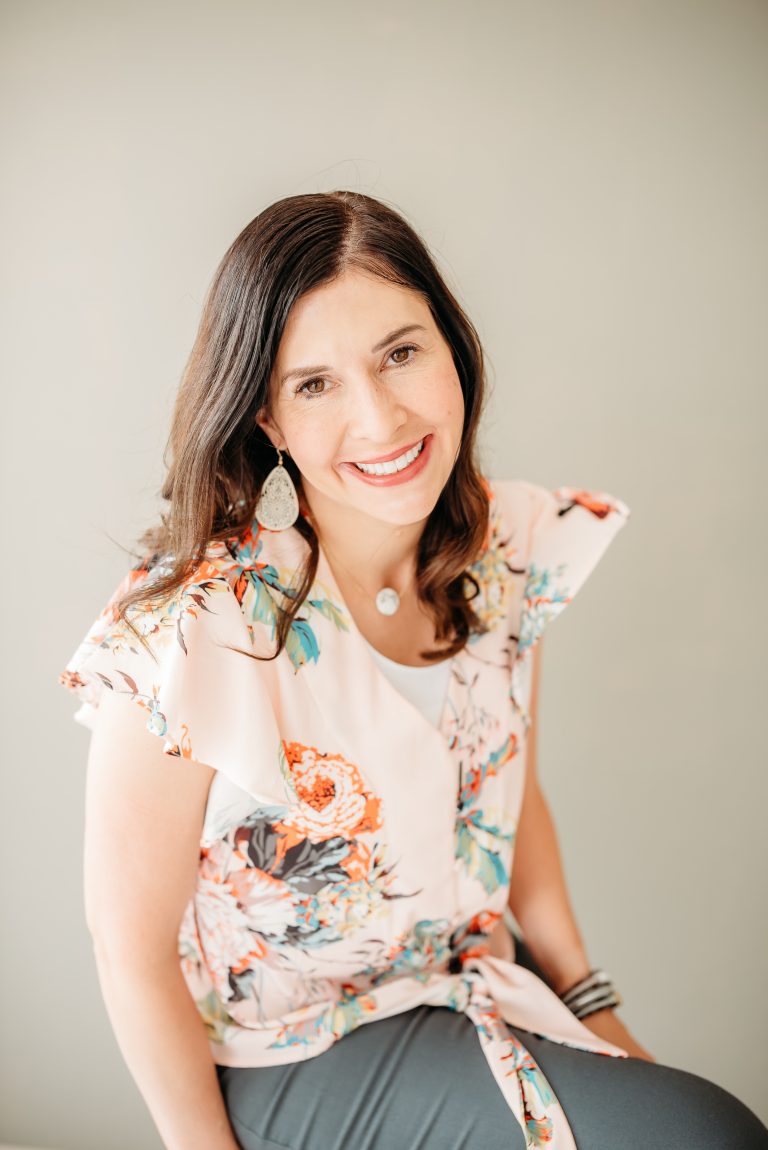